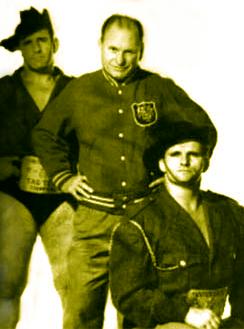 The Fabulous Kangaroos were a Professional Wrestling Tag Team that existed in one form or another from 1957 to 1983. They were started by Al Costello and Roy Heffernan and debuted in Stampede Wrestling. Their gimmick was of an, to use Costello's words, "Ultra Australian" team. They would go on to compete in multiple territories, including Florida, Detroit, Los Angeles, Capitol Wrestling (the precursor to WWE) and many others. Over time, Ray St. Clair, Bruno Bekkar, Don Kent, Tony Charles, and Johnny Heffernan would all spend time as members of the team. Among their many in-ring achievements, the Costello/Heffernan version were 3x NWA Capitol Wrestling United States Tag Team Champions

twice, once with Costello and once with Heffernan. The Costello/Heffernan team was inducted into the Wrestling Observer Newsletter Hall of Fame in 1996.