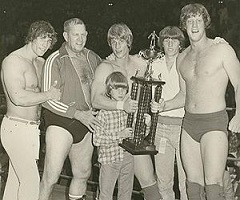 The Von Erich Family was a legitimate Professional Wrestling Family, led by the patriarch Fritz Von Erich (Jack Adkisson, 1929-1997) and consisting of sons Kevin (1957-), David (1958-1984), Kerry (1960-1993), Mike (1964-1987) and Chris (1969-1991). Jack Adkisson debuted as Fritz in 1953 doing a Nazi gimmick. The name stuck even well after the gimmick faded away. Kerry, David, and Kevin debuted in the 1970s, with Mike following in 1983. Fritz set up World Class Championship Wrestling (WCCW) in Dallas and he and his sons were huge box office draws as Faces. Unfortunately, things started falling apart following the death of David in 1984 at the age of 25 under unclear circumstances.note Anything from a drug overdose to acute enteritis to a heart attack has been rumored, though acute enteritis is the official cause. Mike, Chris, and Kerry all ended up commiting suicide; Mike in 1987 at the age of 23 by drug overdose, Chris, who debuted in 1990, in 1991 at the age of 21 by gunshot, and Kerry, who had temporarily broken out and had a run in WWE in 1990-1992, in 1993 also by gunshot. Kevin retired in 1995, and his sons Ross and Marshall signed with MLW in 2019, with their contract allowing them to continue to make appearances in their former home of Pro Wrestling NOAH. Kerry's daughter Lacey had a run in TNA as a member of The Beautiful People and also worked for Wrestlicious. Combined, the different blood relatives have held 144 titles. Among the more significant in-ring achievements, Fritz was a 1x AWA World Heavyweight Champion

; Marshall and Ross have been MLW Tag Team Champions

Besides the actually blood-related Adkisson family, the Von Erichs had fictional relatives. Waldo Von Erich (real name Walter Sieber) was billed as the brother of Fritz Von Erich and they teamed up, and Lance Von Erich (real name William Kevin Vaughan) was billed for a brief period of time in the 1980s as the son of Waldo, but there was no biological relation neither between the two nor the Adkisson family. In the case of Lance, the stunt mostly failed due to audiences recognizing him from his previous run as Ricky Vaughn and, after leaving WCCW following a pay dispute with Fritz, his non-relationship to the family was exposed by Fritz on television in retaliation.