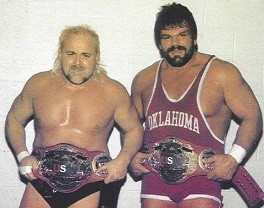 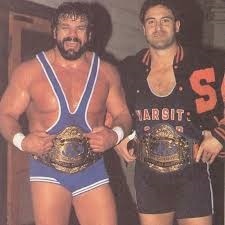 The Varsity Club was a Professional Wrestling Heel Power Stable in what became WCW. It was formed by Kevin Sullivan in 1987 with Rick Steiner and Mike Rotunda with a gimmick of champion amateur wrestlers who wore their lettermen jackets and bragged about how they were better wrestlers than everyone else. "Dr. Death" Steve Williams joined in 1988, with Dan Spivey being the last member of the original incarnation. They broke up in 1989. The original trio reunited at WCW Starrcade 1999, adding Leia Meow, formerly ECW valet Kimona Wanalaya, as their cheerleader. The reunion was short-lived.

Along with the titles pictured above, Rotunda also held the NWA World Television Title

twice, and Rotunda and Steiner both held the NWA Florida Heavyweight Title

They have nothing to do with the movie Varsity Blues.