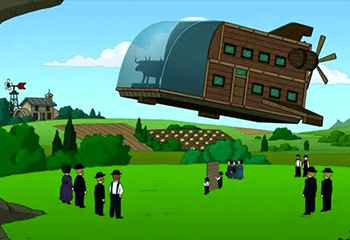 No machines are permitted on the Amish Homeworld.
[He was] Techno Amish. They use machinery and operating systems up to Windows XP. [...] When you have airlocks to maintain and the atmosphere of a planet will kill you, it changes what you need for a simple life.
—Winston Scudder Thurmad, about his father Gregor Mendel Thurmad, Freefall.
Advertisement:

A subtrope of Space Romans, Space Amish are another Fantasy Counterpart Culture ...in space. Like their namesakes, the Amish (found mainly in the midwestern United States and parts of the Canadian prairies) and the closely-related Mennonites, who voluntarily eschew most forms of modern technological conveniences, Space Amish are an offshoot of a technologically advanced race who have rejected most forms of advanced tech in favor of an agricultural life.

Often, the settlers will actually have knowledge of, or even be highly skilled with, the same level of technology as everyone else; they simply choose not to exercise it (whilst never actually losing that knowledge). The settlement also enjoys a surpassing level of peace, with the implication — rarely stated outright — that the lack of technology is the actual source of the peace. In other words, Science Is Bad. For this reason it can also be called a "Luddite Utopia."

As with any utopia, there's usually a catch to Luddite Utopia: for example, upon arrival, it may be impossible for visitors to ever leave. Or, if it's a Cult Colony, you may have to convert to the local religion—which tends to be strict if not joyless. Or human culture may be stagnant. Or you may have to share your body with alien parasite spores. Or you have to actually put in an honest day's work for your supper. Or your descendants may discover that others have it easier and regret the settlers' unilateral decision.

Space Amish settlements might have a Superweapon Surprise in store for invaders—because, really, who better to guard the Lost Superweapon than people who reject technology and don't want to conquer anybody? Even if they don't, though, wider galactic society is usually not interested in crushing Space Amish communities: they tend to be too poor and too boring to be worth conquering. Only the most evil of despots tries it.