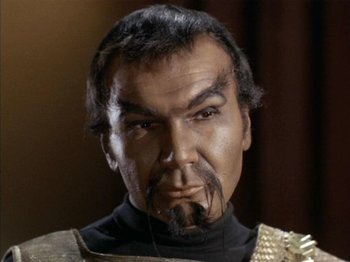 Wait, where are his ridges?
Advertisement:

The One With… the Klingons for the very first time ever!

The war between the United Federation of Planets and the Klingons is coming to a head and it looks like the peaceful planet Organia is stuck in the middle. Kirk puts Sulu in charge of the Enterprise, reminding him that his duty will be to the ship, not to the landing party consisting of Kirk and Spock. The people of Organia are a peaceful, welcoming bunch, content with their medieval way of life. When Kirk informs them of the war encroaching on their planet, the Organians seem unconcerned.

When the Klingons make their grand appearance and start occupying Organia, Kirk and Spock go undercover as traders, hoping to get the drop on the Klingons and drive them out. Much to Kirk's shock, the Organian council of elders betray them to the Klingons, only to rescue them from jail easily enough. Kirk is increasingly chagrined by the Organian's refusal to fight back against the tyrannies that the Klingons are imposing on them.

As the moment of full blown war approaches, the Organians reveal the truth. They are actually Sufficiently Advanced Aliens of pure energy who cannot be killed by conventional weapons. In fact, they use their mental abilities to neutralize not only all the weapons present, but the fleets of both the Federation and the Klingons! They impose a peace treaty on both sides, making it clear that they can render all their military forces helpless no matter where they are. The Organians bid both factions farewell, but before they disappear they express a wish that both races will learn not to be so violent.

Commander Kor claims the Federation is not so different from the Klingon Empire.

Example of:
"Not So Different" Remark

Commander Kor claims the Federation is not so different from the Klingon Empire.