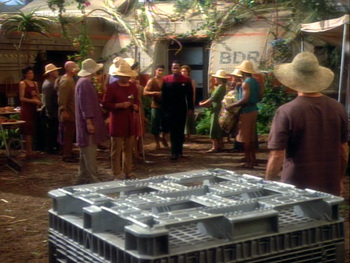 Sisko and O'Brien, in a runabout, come across an M-Class planet with an uncharted human settlement on it. They beam down to talk to the people there and find an agrarian society led by a woman named Alixus. They also find that their equipment no longer works — nothing electronic does — due to a duonetic field around the planet, so they are unable to beam back up or call for help. They are determined to return to their ship and rescue the colonists, but the colonists, particularly Alixus, extol the virtues of living a simple life and don't seem in a rush to leave.

Sisko and O'Brien are given jobs, which seem to take precedence over any effort they might make to facilitate an escape. It soon becomes apparent that Alixus is ruling the colony with an iron grip. Anyone who breaks any laws is placed inside a punishment box to go without food or water. They also learn that Alixus held luddite views long before winding up on a planet that required a luddite lifestyle. As time goes on, Alixus makes increasingly blunt assertions that escape from the planet is impossible, so the two newcomers will have to settle in as permanent members of the community.

Sisko and O'Brien have no desire to live the rest of their lives as medieval farmers. They refuse to change out of their uniforms, and Sisko orders O'Brien to study the duonetic field so they can return to their ship. When a colonist gets deathly ill, Sisko campaigns for him and O'Brien to try to reach the medical kit in the runabout, but Alixus thinks that it would be a waste of time and focus, saying they should instead search the wilderness for new herbs. The patient ultimately dies.

Things come to a head when O'Brien gets caught researching the duonetic field, and Alixus announces that he's committed the colony's greatest offense: wasting energy on a pointless pursuit. She punishes Sisko as his commanding officer to sit in the punishment box. After a long stay, Alixus releases him temporarily, offering him water and rest if he'll discard his uniform and commit to staying in the colony. Without a word, Sisko staggers back inside the punishment box.

Meanwhile, Kira and Dax have noticed that Sisko and O'Brien are missing. They venture out and eventually locate the runabout left behind by the pair. In spite of Sisko's assertion that his runabout would bring attention to the planet he's stuck on, it's actually just drifting in space. Dax and Kira realize that someone must have tried to pilot the ship into the nearby sun but missed. They resolve to track its warp signature to find out where it's been.

Back on the planet, O'Brien has discovered that the planet's geology can't be responsible for the duonetic field and uses a makeshift compass to track down its true source — a generator. O'Brien shuts it down and returns to the village armed with a phaser to free Sisko and reveal the truth. Alixus confirms she purposefully marooned the colonists on the planet but states that it was for the best, as it allowed them to build a peaceful, happy society together.

Sisko manages to get into contact with Kira and tells them to prepare for multiple transports. However, the rest of the colony doesn't want to leave. In spite of the lies that got them there and the many difficulties they face, Alixus was right that they are more happy in the colony than back in their previous lives. For Alixus and her co-conspirator son, however, they will have to answer for the many deaths that they've caused by her deception. The four beam away, leaving the colonists behind.