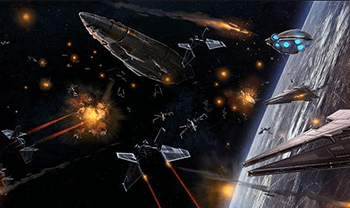 In space, no one can hear you explode and die.
"From a million miles deep in space"
"The battle rages on"
— "Battle Beyond the Stars" by Medieval Steel
Advertisement:

One of the cornerstones of a Space Opera is for there to be a Space Battle somewhere along the line, where the heroes take part in an event that will change the fate of everything, then stop for a Victory Dance and tea if the battle is won.

Well, it's not exactly as simple as that, almost. It is meant to be the occasion in a movie, game or TV series where it can show off where most of the budget probably went and why it took as much time as it did. It provides jaw-dropping visuals, tons of Slow Lasers, a lot of tense edge-of-your-seat action, advanced iconic vehicles or weapons, and a totally awesome end sequence.

Essentially, it is an opportunity to show off the special effects and a ton of ideas that the creator has come up with, to try and blow the audience away and use the potential awesome to lobotomize them into drooling masses as they enjoy the spectacle of it all. Of course making such battles have become easier as special effects have become simpler to make and have become much more advanced. The first film to really push the envelope in terms of this was Star Wars Episode IV: A New Hope, during the battle against the Death Star. Virtually every battle will stick to the rule of Space Is Noisy, because of Rule of Cool. Nowadays however films with huge battles are commonplace thanks to the advancement of technology.

This trope has extended into fantasy or historical movies as well as they have become more popular, this is because use several of the same methods and cliches to bring about the same effect. The Lord of the Rings for example required creative use of CGI and miniatures to portray and do epic battles described in the books justice.

The earliest visualization of the concept of space battles on film has its roots in the rocket ship aerial combat scenes from the Flash Gordon and Buck Rogers serials of the 1930s-40s. However, such battes were much rarer than is commonly thought (most rocket ships being unarmed) and often involved nothing more than a chase scene with rocketships standing in for horses and buggies. Also, these don't quite count as space battles technically since they were generally restricted to the stratosphere of either Mongo or Earth. But these are the roots of the depiction of space battles as aerial dogfights.

Not to be confused with the website SpaceBattles.com, although as the name says, they do like a good battle there.

The Kaylon attack on Earth with humans and the Krill defending

The Kaylon attack on Earth with humans and the Krill defending