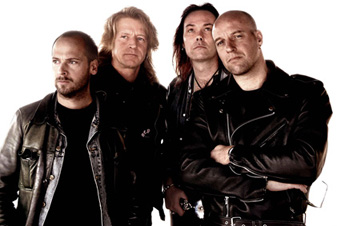 Early albums focused on the story about the eponymous Iron Savior, an advanced spaceship built by the Atlantians of ancient Earth to destroy the evil mainlanders who were assaulting their island paradise, known as The Alliance. The mighty Iron Savior was loaded with an AI that was catastrophically corrupted by the Alliance, who went on to destroy the Atlantian Moon Colony, and an Atlantian strike team had to board the vessel and sacrifice themselves to send it out into deep space to prevent the devastating weapon being used against Atlantis. They programmed it to return in 350 years, in hope that by then the Alliance would be defeated. Due to an error, it was accidentally programmed to return in 350,000 years, instead. With the Alliance's temporary upper-hand gone, the situation quickly devolved into nuclear warfare, blasting both sides of the conflict back into barbarism. From which... Our world evolved.

Now in the year 2108 the Iron Savior returns to Earth and is confronted with a scenario where the civilisation of Atlantis no longer exists. All attempts to contact possible survivors failed. The advanced AI, was still paralysed from the effects of the Alliance 350,000 years ago and unable to make decisions. So the computer still in charge draws the fatal conclusion that Atlantis was destroyed by the Alliance who still exists and rules the planet. With the logic of a lifeless machine the Iron Savior carries out its prime directive: Protect Atlantis and Conquer the Alliance.

Later albums focus more on one's perception of reality and the spirit of freedom, shown in such songs as "Machine World".