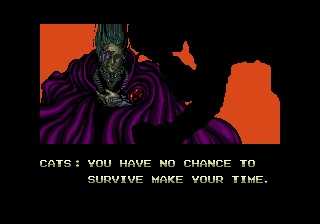 WHAT YOU SAY !!
"Resistance is futile to one who is the destroyer of all that exists!"
— Trigon the Terrible, The New Teen Titans
Advertisement:

A villain will say some variation of "resistance is futile." Often, it will turn out resistance was anything but, but villains do like to have their moments. Other common variations are "it is useless to resist us" and "resistance is useless."

See also Nothing Can Stop Us Now!, and other forms of Tempting Fate. Compare You Can't Fight Fate, Failure Is the Only Option, But Thou Must!, Morton's Fork, and Xanatos Gambit when resistance really is futile.