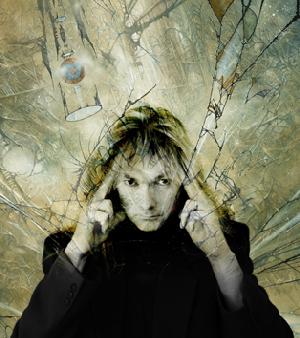 "Welcome. You have entered the cranial vistas of psychogenesis. This is the place of no-time and no-space. Do not be afraid...."

Ayreon is a series of sci-fi/fantasy Rock Opera albums by Dutch musician Arjen Anthony Lucassen. The music is mainly a combination of folk-influenced Progressive Rock and Progressive Metal, but many other genres are represented. A key element of Ayreon's sound is the use of many guest musicians and vocalists - 01011001, for example, has 17 singers, including Lucassen himself.

Although each album has its own concept or plot, the stories are all connected, if in sometimes strange ways. (The possible exception is Actual Fantasy, which has songs based on several different stories and doesn't seem to be related to the other albums, although it could be argued elements of "Stranger from Within" were used in The Human Equation, and "Back on Planet Earth" has several concepts that are later used in 01011001.) Because of the Mind Screw nature of the series, it's hard to describe the plot without giving away major spoilers for the different albums.

After a minor Hype Backlash to 01011001, Arjen decided to stop making Ayreon albums, releasing Lost in the New Real, with him as the only lead vocalist, in 2012. Come 2013, however, he revived Ayreon with a fresh set of vocalists and a more instrument-oriented direction in The Theory of Everything. Four years later, The Source was released, coming back to both a guitar-heavy sound and the Forever storyline where the album serves as their backstory.

Arjen has teased a new direction with Transitus, a romance dealing with death in more Gothic Metal direction than the previous albums. The album, together with a tie-in comic book by Felix Vega, is set for release in September 2020.

Note: Due to the very nature of the series, it is difficult to discuss the tropes without revealing major spoilers. To those that are new to the series: You Have Been Warned.

Tropes regarding the theatrical adaptation will go to The Theater Equation.

01011001
The Theory of Everything
Father: "I was driven and blind, not so unlike yourself!"
The Source
Transitus