Music / Lost in the New Real 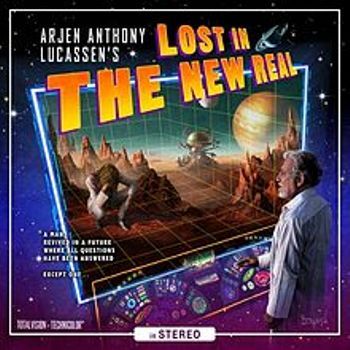 Note: This page is under heavy construction.

Lost in the New Real is a Concept Album released in 2012 by Dutch musician Arjen Anthony Lucassen. It is a departure from his Ayreon project, which spans several albums and features dozens of guest musicians, as all main vocals are performed by Arjen himself. The story may have some loose connection to the overarching plot of Ayreon, in any case (see tropes below).

Lost in the New Real concerns a 21st century man known as Mr. L, who is awoken from cryogenic sleep several hundred years in The Future. He is welcomed by Voight Kampff, the "hard-headed shrink" who has been assigned to help Mr. L adjust to the strange world he now belongs to. Technology has progressed to a point where what is real and what is virtual reality is nearly or completely indistinguishable from one another. The album concerns itself primarily with themes and motifs running throughout the Ayreon albums: alienation, dream sequences, technology versus nature, etc. Probably an example of Romanticism Versus Enlightenment.

Pink Tropes In A Purple Zeppelin