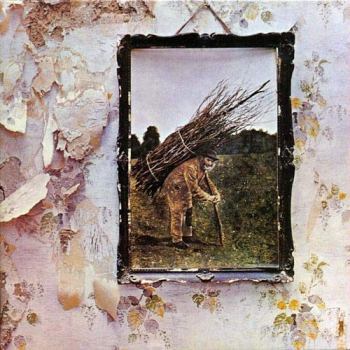 Does anybody remember laughter?
Advertisement:

Led Zeppelin's fourth studio album, released in 1971, officially doesn't have a title, so it's best known as Led Zeppelin IV. This decision represented a clean slate for the band, who wanted to write an album completely different from the rest of their material. It also served as a retaliation against critics who believed the band had no substance after the mostly negative reactions to Led Zeppelin III the previous year. Recorded in isolation in the English countryside with support from contemporaries The Rolling Stones and Fleetwood Mac, the album usually ranks at the pinnacle of Led Zeppelin's songwriting abilities, due to its impressive Genre Roulette and accessibility.

In lieu of indicating their names, the band members each used a symbol since they believed that titles did not matter. Jimmy Page's is probably the most notable, given that he has not given a meaning behind it despite extensive speculation, and the symbol (ZoSo) is not even meant to be spoken. This hasn't stopped most fans from coining the album after Page's symbol, or Four Symbols, The Hermit, and Runes, among others. Nevertheless, the record company, against the band's interests, released a series of ads hinting that it was indeed a Led Zeppelin record. It has since become one of the best-selling albums of all time.

The record is best known for the fan favorites "Black Dog", "Rock And Roll", "Going To California", "Misty Mountain Hop"... and their Signature Song "Stairway To Heaven". The latter has become somewhat of a Black Sheep Hit to the band, as it's not really indicative of their usual style and has been played, covered and referenced so often that even Robert Plant is sick of it. The songs have been cited to codify the Heavy Metal and Hard Rock genres as they exist today, using spare instrumentation and complex song structures.

This album was a success from the start, selling 30 million copies to date, which is no small feat to begin with. It also serves as one of the first Take That, Critics! albums, later to be joined by blink-182's untitled album, Green Day's nimrod., My Chemical Romance's The Black Parade, etc., etc.

If it keeps on tropin', levee's gonna break...: