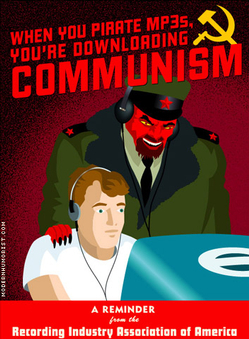 Only total surveillance from the RIAA can stop this totalitarian horror!
"But deep in your heart you know the guilt would drive you mad
And the shame would leave a permanent scar
'Cause you start out stealing songs and then you're robbing liquor stores
And sellin' crack and runnin' over school kids with your car!"
—"Weird Al" Yankovic, "Don't Download This Song"
Advertisement:

If you're watching television, it doesn't matter if the characters are drug-smuggling, whore-mongering, granny-beating, world-destroying murderers: the illegal downloading of movies and music is guaranteed to morally offend them. Any good character who doesn't fall in with this philosophy will learn their lesson by the end of the episode. Expect physical theft to be used as a comparison and/or a plot point.

When you start a commercially released VHS tape, DVD, or Blu-ray Disc, they usually open with verbose, unskippable screens from the FBI or Interpol warning the viewer massive fines and time in jail can happen as a result of piracy. Many DVDs also include a PSA in the beginning about how piracy is wrong. In the most extreme cases, this segment can't be skipped... sometimes the disc can't even be stopped while it's playing. Ironically, the person who's logically most likely to see it is someone who legally paid to own a copy, because those who end up distributing these downloads like to edit them out. In Europe this can lead to three almost identical warnings in German (Germany, Austria, Switzerland), two in Dutch (The Netherlands and Belgium) at least three in French (France and Belgium and Switzerland again), two in Italian (Italy and, you guessed it, Switzerland), two in English (the UK and Ireland), a number of very similar Slavic languages as well as a number of similar warnings in the Nordic countries.

The unintended side effect of browbeating legitimate paying customers while pirates don't see these warnings anyway has also led to subversions where DVDs will thank the viewer for paying for the movie.

Keep Circulating the Tapes and Abandonware are related concepts. However, in regards to this trope, they are usually ignored. This is because companies that are the victims of such types of piracy often give subtle glances that they don't particularly care, may even actively encourage it, or have ceased to exist and so left the material in limbo, and tends to be virtually unsellable anyway, since it is often obsolete systems and formats that were commercially viable in the day but are now barely supportable now. Information Wants to Be Free, on the other hand, will usually pose a clear danger and demand swift action. Not that it will help much. Not to mention, people typically don't complain about Keep Circulating the Tapes and Abandonware anyways, since it's not hurting any business if the market's non-existent in the first place.

See also New Media Are Evil, Even Evil Has Standards, Felony Misdemeanor, Copy Protection. See Digital Distribution for a form of media which can be tarred with the same brush. For the common catalyst on both sides of the argument, see DRM. Similar arguments are occasionally made against Fan Fic by authors, complete with the analogy to stealing cars. Also, see Internet Counterattack for one example of what happens when the pirates throw tantrums, as well as Flame War for what happens when pirates and anti-pirates collide online.

This has resulted in a major shift in the way music artists actually make a living. The paradigm used to be you made money from selling albums and tours were to promote your new album so people would buy it. Nowadays the inverse is true—you make money from touring, and releasing an album is a way to encourage people to come to your shows. Just compare the relative costs of albums and tour tickets since popular music began.

For the opposite trope, see Digital Piracy Is Okay.

This is far from being a Discredited Trope or a Dead Horse Trope. It's more of a Cyclic Trope given how public opinion swings on the issue of copyright protection at any given time. Given you can now download a car...

For the other kind of present-day pirates, who are generally agreed to be pretty evil, you want Ruthless Modern Pirates.

To play the next game, Jesus (played by Caddicarus) had to pirate it because it wasn't on Steam anymore... Unfortunately, since piracy is a sin...

To play the next game, Jesus (played by Caddicarus) had to pirate it because it wasn't on Steam anymore... Unfortunately, since piracy is a sin...