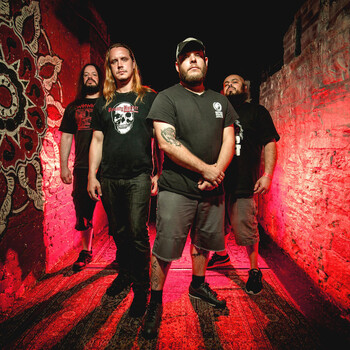 Origin is an American technical/brutal death metal band. Characterized by their incredibly fast and technical music and the extreme proficiency of all their instrumentalists, as well as their tendency to focus on cohesive songwriting a lot more than their contemporaries, Origin has become one of the biggest names in technical death metal over the years, having played multiple high-profile festivals and headlining tours.

Formed in 1997 in Topeka, Kansas by guitarists Paul Ryan and Jeremy Turner (the former not to be confused with the politician of the same name, obviously), the band quickly picked up Clint Appelhanz (bass) and Mark Manning (vocals), along with George Fluke (drums) shortly after. This lineup would go on to release a demo, though Fluke and Appelhanz left soon after and were replaced by John Longstreth and Doug Williams, respectively. This lineup was the one that gained them a contract with Relapse Records and released their self-titled debut; in the time between their debut and their second album, Manning and Williams left and were replaced by James Lee and Mike Flores. For a while after, the band continued to go through numerous lineup changes, though things finally settled down after Lee left; as of now, the lineup consists of Ryan, Flores, and Longstreth, along with Jason Keyser of Skinless fame on vocals.

The band provides examples of the following tropes: