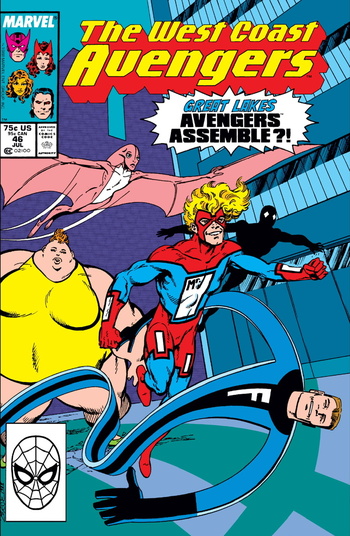 Created for Marvel Comics by John Byrne in the July 1989 issue of West Coast Avengers, the Great Lakes Avengers were a group from Wisconsin. The original roster included:

The team appeared sporadically in Avengers titles during the early 90s, and were even briefly joined by more "official" Avengers members Hawkeye and Mockingbird. After a few years absence, the team returned, renaming themselves the "Lightning Rods" after the Thunderbolts, who were popular at the time, and appearing in both the Thunderbolts and Deadpool comics of the time. Eventually, they reverted back to the name Great Lakes Avengers in time for a series of very small cameos in the JLA/Avengers crossover. (It should be noted that this is around the time the team started calling themselves the GLA. Coincidence? And apparently this confirms that they are actually "real" Avengers after all somehow.)The team roster gained their first solo book in June of 2006, thanks to Dan Slott, with the four part GLA miniseries. This was also the first major roster change since their introduction, as Dinah Soar was killed and Flatman and Doorman went on a recruiting spree. New members included:

Since then, the team has appeared sporadically in a wide variety of titles. At the end of the GLA series, they were forced to change their name for in universe legal reasons. They first settled on the Great Lakes X-Men (after they realized that all their members were mutants), then became the Great Lakes Champions after winning a poker game. They registered during the Civil War event and became the official Initiative team for the state of Wisconsin, and changed their name once again to the Great Lakes Initiative, momentarily taking on Deadpool as a reserve member. Some time after the Secret Invasion, Nevada team leader Gravity was transferred as punishment to head up the Avengers in his home state. Squirrel Girl has joined the New Avengers in New York as official nanny for Luke Cage and Jessica Jones.

Flatman and Squirrel Girl did make a guest appearance on Fantastic Four: World's Greatest Heroes as part of a Terrible Interviewees Montage. Both were rejected. Flatman also appeared in The Super Hero Squad Show, while Squirrel Girl appeared in one of the video games based on the property.

In 2018, it was announced Squirrel Girl and Mr. Immortal would make their live-action debut as members of the New Warriors on Freeform. But the series was ultimately cancelled in 2019 after Freeform passed on the pilot and Marvel Studios unable to find another network to run it. Mr. Immortal would eventually appear on She-Hulk: Attorney at Law in 2022, although with a completely different backstory and personality.

The team received a short-lived series as part of Marvel NOW! (2016), where the team moves to Detroit.