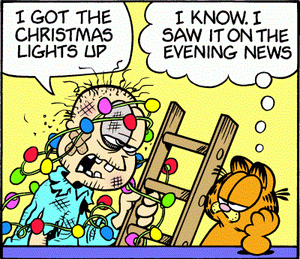 And the electric bill will be the least of his worries...
"One light goes out, they all go out!"
— Bob Rivers, "Twelve Pains of Christmas"
Advertisement:

In fictionland, dealing with Christmas lights is extremely difficult. No matter how neatly a character puts them back into the box, they will be horribly tangled the next time they're taken out of it. There will probably be one broken bulb that makes all of the others (in a string of hundreds of lights) go out (something that can genuinely happen depending on how the lights are wired, though nowadays most lights companies know better than to sell strings of lights wired in series specifically because of this trope) — woe betide the characters if they forget to check for that before hanging up the string of lights. They may also hang up the lights, only to find out that the cord is just a little bit too short. And when they finally plug it in, the whole thing may short out.

Even if the characters do manage to rig up the lights and they work, Finagle's Law dictates that something will go wrong later. Maybe someone will accidentally ruin the display, or the characters have to take it down and redo everything because someone isn't happy with how it turned out.

Christmas lights can even carry a risk of Amusing Injuries. Accidents involving the string of light — and in some cases, the mere act of turning it on — may lead to electrocution. If someone has to climb a ladder to hang up or try to fix the lights, expect them to fall at least once. Sometimes, a character will inexplicably end up covered in Christmas lights.

Over-the-Top Christmas Decorations is a common cause of Christmas Light Chaos, but those who prefer more modest decorations are not immune.