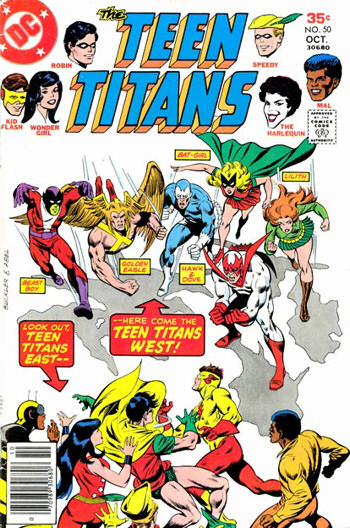 Your Super Team is really popular! So popular, in fact, that The Powers That Be have decided it deserves a Spin-Off. What to do?

Make a West Coast Team, of course! Take all the offbeat, second-string, and popular guest characters and have them start their own team, in a separate setting.

A West Coast Team is typically composed of characters with totally different worldviews from their East Coast counterparts, but with a similar team dynamic. They are so named because most American superhero comic books take place in the Northeast, specifically New York or a No Communities Were Harmed version thereof (Metropolis, Gotham City). Thus, the West Coast Team tends to relocate to the second-biggest US population area — California.

Also see Similar Squad, which is usually a one-off gag.

This trope is related to serialized media. A self-contained story is more likely to feature a Hero of Another Story or Hufflepuff House. Contrast Superhero Capital of the World.