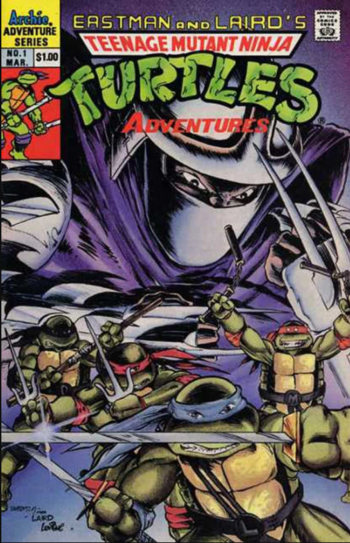 Issue 1 of the comic.
Advertisement:

Initially based on the massively popular first cartoon, the Archie-published Teenage Mutant Ninja Turtles Adventures eventually became one of the strangest incarnations of the franchise, and one that fans still remember with some fondness.

After adapting the cartoon pilot and a couple other episodes, the book set off in its own direction, introducing its own original characters and stories. While cartoon mainstays like The Shredder, Krang, and the Rat King still made appearances, they eventually took a back seat to characters like Ninjara, a Japanese Ninja fox; Cudley the Cowlick, living spaceship in the shape of a cow's head; Null, a businessman/demon with plans to sell Earth; and Armaggon, a mutant shark from the future.

The book had an environmentalist tone, with green aesops galore. It also introduced young readers to political topics such as Apartheid, the Chinese occupation of Tibet, the Gulf War, and even showing the more unpleasant aspects of Christopher Columbus' "discovery" of the Western Hemisphere and the Atomic Bombings of Hiroshima and Nagasaki. While the quality of the actual stories was variable and debatable, several of the concepts introduced here proved quite popular with fans of the franchise, some of whom continue to hope that elements from the book will be introduced in further incarnations.

The series lasted for 72 issues (March, 1989-October, 1995). In 1995, the series was cancelled before the book's regular creative team could begin their biggest storyline, dubbed "The Forever War". Instead, a three-issue storyline entitled "Year of the Turtle" was published in 1996, which had the Shredder return for a final battle against the Turtles only to end up in a coma. Despite serving as the finale to the Archie series, the miniseries still left some story arcs and conflicts hanging and unresolved.

The "Forever War" story arc remained in limbo for more than a decade, until Mirage Comics announced that they would allow the story to be completed and released. Unfortunately, the project was plagued by scores of delays, and the project was cancelled after Nickelodeon's purchase of the franchise. However, IDW Publishing has gained the rights to publish Ninja Turtles comic books, which include reprinting this one, so if you're interested, you can buy a paperback copy. There is also an IDW forum thread

dedicated to reviving the "Forever War" storyline, as well as a crowdfunding campaign

A re-edited version of the comic, including some original stories, was published by Fleetway in the UK from 1990 to 1994 under the title Teenage Mutant Hero Turtles Adventures.