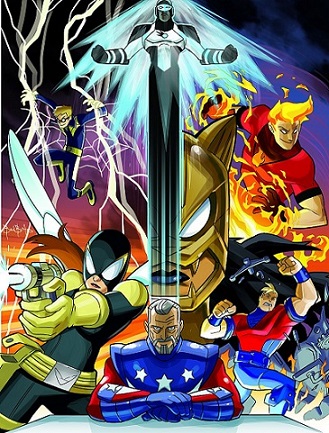 A New Generation of Heroes will rise . . .

Before there was Archie Comics, there was MLJ, who, in The Golden Age of Comic Books, published comics featuring super heroes like the Shield (who happened to be the first patriotic superhero . . . yes, before Captain America), the Comet and Steel Sterling. In The Silver Age of Comic Books, these heroes were joined by the likes of the Fly, Fly Girl, the Jaguar and the Web. They joined forces as a super team dubbed . . . The Mighty Crusaders.

The Mighty Crusaders title was revived in The '80s.

More information about the Mighty Crusaders can be found in The Other Wiki.

The Present: The Mighty Crusaders, after defeating every known supervillain, opted to retire to the town of Red Circle to raise families of their own. During a party celebrating the anniversary of their victory, the Brain Emperor, an old enemy of theirs, attacks them. Joe Higgins a.k.a. the Shield, takes the other Crusaders' teenage children to safety. By the time he returns to aid his fellow Crusaders, he arrives too late. Brain Emperor has disposed of them. The Shield takes it upon himself to train his teammates' children to take their place as The New Crusaders.

The Web (Wyatt Raymond) - His parents were the original Web (John Raymond) and his wife Pow-Girl (Rose Raymond).

The first story arc is titled "Rise of the Heroes". It is followed by "Dark Tomorrow".

Tropes Associated with this comic: