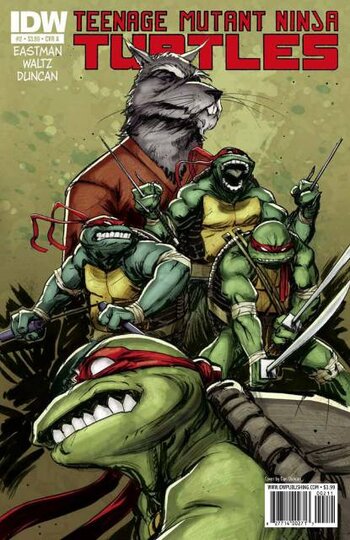 The newest comic book incarnation of the popular Teenage Mutant Ninja Turtles, and the first new material produced after Nickelodeon's acquisition of the property, launched in 2011. Set in a new continuity unconnected to any others, it features the return of TMNT co-creator Kevin Eastman to regular creative duties after more than a decade away from the fold.

In ancient Japan, Hamato Yoshi and his four sons are murdered by the Foot Clan and their leader Oroku Saki. Centuries later, they are (apparently) reincarnated as a rat and four turtles, who are then used as test subjects for geneticist Baxter Stockman's experiments on brain enhancers (Splinter), mutagens, and super soldier formulas (The Turtles). Later, after an attempt at corporate espionage gone awry, they become exposed to mutagens, which metamorphose them into the characters we know and love.

But there's one problem. Before the mutation took effect, one of the turtles was taken by an alley cat. Though Splinter managed to fight the cat off, the turtle ended up lost. Fifteen months later, while Splinter, Leo, Don, and Mike rumble with Old Hob (the cat got mutated too), Raphael has spent this time wandering the city as a homeless vagrant.

The origin is not the only marked change. April, in this incarnation, was familiar with the unmutated turtles and in fact gave them their renaissance artist names. Casey Jones is a college student living with his father who takes Raphael in. Baxter Stockman is affiliated with Krang, now a general, but not the Shredder. Human versions of Bebop and Rocksteady have been introduced their first appearance not directly connected to their original cartoon incarnations. All in all, it serves to give the series a "Ultimate TMNT" vibe: For the first time in the franchise's history, all of its disparate elements and characters are seen in one place. The 2012 cartoon also goes for the same vibe, but this started first.