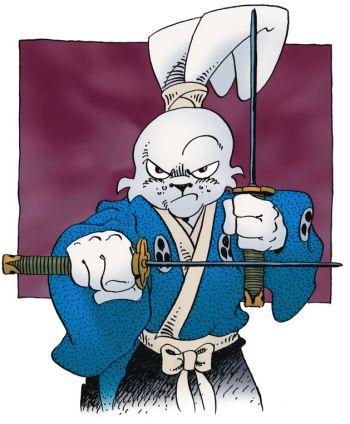 This comic book series by Stan Sakai chronicles the adventures of Miyamoto Usagi, once a loyal retainer of lord Mifune who, after his whole clan was vanquished in battle, walks the earth as a Rōnin, meeting interesting people, facing mythological monsters and solving the odd murder mystery too.

Also, he's an anthropomorphic rabbit in an alternative dimension Hollywood Medieval Japan. And the historical background and strong sense of cultural nuances work so well. As does the addition of tiny dinosaurs.

One of the longest-running comics of all time to be drawn and written by a single person, Usagi Yojimbo has been running (under various publishers) since 1984. It's been noted for its meticulously researched and accurate portrayal of feudal Japan (talking animals notwithstanding) as well as its ability to take readers by surprise by messing with tropes; a seemingly lighthearted story may turn out to be a heartrending tragedy, or vice-versa.

His most well-known appearances are those with the Teenage Mutant Ninja Turtles, thanks in part to several crossovers between different incarnations of the properties, and the friendship between Sakai and the Turtles creators. Besides TMNT comics, Usagi has appeared in two episodes of the 1987 cartoon (and even had a figure in the toy line), eight of the 2003 show, and three on the 2012 show (with one being written by Sakai himself). The latter two shows have also done episodes set in Usagi's world—the closest things yet to an Usagi animated series.

As one of the more famous and successful examples of creator-owned comics, Usagi Yojimbo has had a number of different publishers. Starting out in the anthology Albedo Anthropomorphics, it later moved to Fantagraphics Books where it started its ongoing title. It was then published by Eastman and Laird's Mirage Studios for a time, before moving on to Dark Horse Comics. Collected editions are available, with the first seven books published by Fantagraphics and the rest by Dark Horse. note Though the Mirage issues, which were originally published in colour, are in B&W as the colour plates were lost at some point. In March of 2018, the series moved to a series of miniseries, with both the total numbering and the Dark Horse numbering listed in the indices. And most recently, in 2019, the series moved to IDW Publishing, renumbered yet again and being published in colour.

A Chibi version of Usagi, Gen and Kitsune was added as an expansion to CMON's Arcadia Quest in 2020.

A video game for the Commodore 64 called Samurai Warrior: The Battles of Usagi Yojimbo was released in 1988. A mobile game for iOS and Android was also released, Usagi Yojimbo: Way Of The Ronin.

On February 6, 2018, a full animated series was officially announced as being in development

and in July 2020 it was announced as Samurai Rabbit: The Usagi Chronicles on Netflix

. Rather than an adaptation of the comic, it will be a future-set series about a descendant of Usagi, much like the once-proposed Space Usagi series. Everything old is new again. Hopefully, the Turtles can make an appearance.