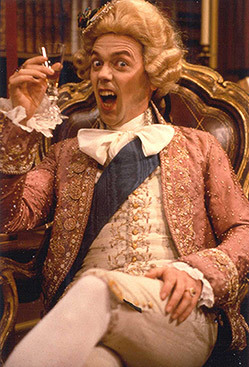 Sometimes the gene pool needs a heavy dose of chlorine.
"If excessive ambition was the fault most commonly attributed to the middle class, failure to provide a suitable example and to care properly for their subordinates were the most common complaints against the rich. The aristocracy was widely seen as preoccupied with duels, London, adultery, foreign fashions, fox hunts, and gambling."
— Kirstin Olsen, Daily Life in Eighteenth Century England
Advertisement:

The Ditz with a trust fund. The Upper-Class Twit is either an aristocrat or a relative of someone in the upper echelons of society, and is automatically provided with all of his living expenses. In other words, he was a Spoiled Brat as a child, and now he has no reason to contribute to society, which is just as well, since he doesn't have the skills to contribute anyway. More often than not, he leads a hedonistic lifestyle that embarrasses his family. Highly prone to Conspicuous Consumption. Embarrassing the family enough or doing something truly heinous as opposed to just assholish may get them cut off, but this is not exactly common. Instead, they will usually just be leashed to a trust fund and kept out of sight and away from any sort of family assets that they risk gaining control of, as it is simply easier to provide for them and clean up their messes in private than to unleash them on the world and risk them bringing shame to the family or drawing unnecessary attention from shady associates who want their money.

Usually used as a foil for The Jeeves or some other more intelligent but lower-class character. The male Upper-Class Twit is often a prime target for Gold Diggers, while darker examples are typically substance-addled hedonists and likely rapists whose activities are typically covered up by hush money payouts to their victims until they have finally harmed too many people for money alone to be able to keep things out of sight.

A popular subtype and the female counterpart to the usually male Upper-Class Twit is the Airhead Heiress — a young, brainless, fashion slave party girl heiress. Any resemblance to Paris Hilton or one of the Kardashians is purely coincidental. Less wealthy or successful examples are typically small-time would-be influencers living dysfunctional and/or outright pathetic lives (typically sustained by nothing but a trust fund and possibly an OnlyFans account, with a lifestyle that is typically far beyond their means) who are so deep in the depths of narcissistic self-delusion that they cannot see that most of their followers are there out of pity or amusement.

Sometimes they're Obfuscating Stupidity, and they may even be up to something far more interesting after hours. See also Sheltered Aristocrat.

On the off chance that the Upper-Class Twit has a job, it will usually be a sinecure with no apparent duties, though some may get some sort of reasonably prestigious white-collar position handed to them, usually by someone who owes their family a favor. If this does happen, they may sometimes rise to the occasion, get their act together, and become a valued member of the organization, but they are more likely to crash and burn after a few months in and get unceremoniously fired for their incompetence (if their family does not have enough pull) or become a department-ruining scourge and pox on the organization who cannot be touched for fear of losing their family's favor (if they do have that kind of pull). A Twit in a position authority may become a Pointy-Haired Boss, but that is less common than one might expect: a Pointy-Haired Boss has responsibilities which he bungles, while a true Twit has no responsibilities at all. To become a Modern Major General is a more respectable career path for a brainless young aristocrat. An older one, especially in 1920s-1950s settings that involve murders in libraries, may well be a retired Major or Colonel, being referred to by that rank. If this character actually ends up in an active military position they'll often end up as the Ensign Newbie, or worse yet a General Failure.

A Sub-Trope of Idle Rich.

Compare Valley Girl (who doesn't have to be rich, among other differences), Rich in Dollars, Poor in Sense, Nouveau Riche (who starts out poor and strikes it rich, and is crass about it). May overlap with Uncle Pennybags.

The opposite side of the same coin is the Gentleman Snarker, who is very clever but terminally lazy.

The Spear Counterpart of Rich Bitch.