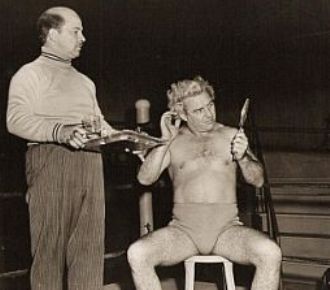 I feel pretty, oh so pretty.
"I'm so pretty, I should have been born a little girl!"
— Johnny B. Badd, WCW
Advertisement:

Professional Wrestling bookers are known to use every dirty trick in the book to make a heel hated, and Gorgeous George is one of the most basic tricks there is. The archetypal "Gorgeous George" gimmick is an effeminate pretty-boy who, if he's not an outright drag queen, at least dresses, looks, and acts very androgynous. He wears sequined robes and feather boas, he keeps his hair perfectly coiffed, his nails perfectly manicured, and if somebody hits him in the face, watch out! By presenting an effete image, coupled with the standard heel tactics of lying and cheating, he inflames the anger of the crowd. Gorgeous George never outright says that he's gay - it's constantly implied and hinted at, but if he actually admitted it, it wouldn't be Gorgeous George anymore.

The original Gorgeous George was George Wagner, who began wrestling in the 1930s, making this trope Older Than Television. Wagner became popular in the wrestling circuit for his outrageous gimmick, and with the advent of television became one of the biggest celebrities of the era. Muhammad Ali and James Brown both credited Wagner as part of their inspiration for their own flamboyant behavior, and it may require two separate wikis to list everyone whom THEY have influenced/inspirednote Ali was really inspired by Freddie Blassie, who he mistook for Gorgeous George, but that just goes to show how ingrained George was in public consciousness. Subsequent wrestlers took on similar personae, including Johnny B. Badd, Rico, Goldust (who subverted the trope by turning face), "The Model" Rick Martel, and "Adorable" Adrian Adonis.

The Gorgeous George has a lucha libre counterpart in the Exotico, who tends to be even more campy and sexually ambiguous than the American version. The major distinction is that while earlier Exoticos explicitly denied that their ring behavior reflected their actual preferences, since the 1980s many LGBTQ Exotico wrestlers have embraced their identity publicly and see lucha libre as a means for moving up in the world.

See also Sissy Villain, Depraved Homosexual, Depraved Bisexual and Psycho Lesbian. Contrast The Fighting Narcissist whose sexuality is rarely questioned. Needless to say, this can have some very Unfortunate Implications.