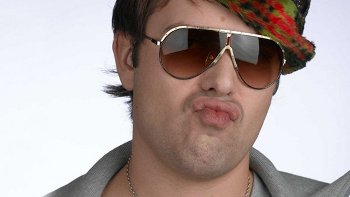 It's gonna be totally fuckin' Mexico, dollsnatch.
The idiots are self-regarding consumer slaves; oblivious to the paradox of their uniform individuality. They sculpt their hair to casual perfection. They wear their waistbands below their balls. They babble into handheld twit machines about that cool e-mail of the woman being bummed by a wolf. Their cool friend made it. He's an idiot too.

Welcome to the Age of Stupidity.

Nathan Barley is, in the words of his creator Charlie Brooker, "an upper-middle-class London media pissant who sorely deserves an icepick in the cheek." His first appearance was on the TV Go Home spoof website, in channel slot descriptions of a fictional series named Cunt — which was then adapted for a real Channel 4 series. And renamed, for obvious reasons.

The series' six episodes (and one pilot) are set in Hosegate, a fictional area of East London (though remarkably similar to Shoreditch or Hoxton, as anyone who has experienced the arts scenes there would testify). The focus is on the hyperactive, clownish protagonist Nathan in his adventures cataloguing and pioneering the gritty, fashion-obsessed hipster zeitgeist of the time, while shamelessly promoting his personal website Trashbat.co.ck and working at his amateur film studio Trash Industries.

Alongside Nathan, we also follow antagonist Dan Ashcroft; a bitter and depressed journalist who is ashamed of his current employer Sugar Ape, a pretentious lifestyle magazine charting the works of various "artists" famous only due to shock value and poor taste. Dan despises Nathan with a passion, but can't seem to shake his omnipresent stench, and is desperately seeking a way out of the madness of the local scene.

Despite the laughs, and its format as a traditional sitcom, it's a rather scathingly-targeted satire of a particular cross-section of media-savvy hipsters. The show was a commercial flop in 2005, and so poorly received upon first airing that Channel 4 changed the timeslot and aired the final two episodes back to back, seemingly in an attempt to get rid of it. As is so often the case however, it has gained a steady cult following since its release on DVD; especially in recent years, as the 'Idiot' subculture it lampoons continues to grow bigger.