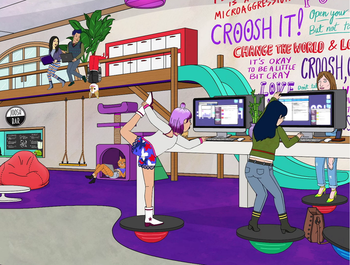 "It was the type of environment carefully calculated to make creative types feel comfortable. Like a gorilla enclosure for nerds."
— The Many Lives of Stephen Leeds
Advertisement:

For decades, office life was portrayed as a drab, grey existence full of identical cubicles and employees who had no desire to be there. They were practical and utilitarian, and didn't offer much in the way of fun.

Then, in the early 2000s, we saw the emergence of the Wacky Startup Workplace.

Rather than cubicles and drab walls, these offices are brightly colored, brightly lit, and bursting with amenities all around, often with the stated goal of improving productivity. Instead of white shirts and ties, the dress code is casual, and employees can be seen lounging around in flip-flops and shorts. The office is filled wall-to-wall with air hockey tables, skateboard ramps, and employees goofing off and enjoying themselves. Expect to see plenty of dogs, and maybe even a full bar. Office Sports are not on the downlow, but probably encouraged. Basically, it's the office version of the Coolest Club Ever, though as the examples below attest, this doesn't always make it a nice place to work.

This is especially common with tech and media startups (like the Shallow News Site Satire), as these industries are often seen as the land of the Tech Bro, the Bunny-Ears Lawyer and younger employees looking for a fun workplace. Due to the large amount of competition in the tech industry, these additional amenities can be enticing for job applicants who have been offered similar salaries by other companies. However, even business giants can get it on this; Google is an example of a major player with fun offices.