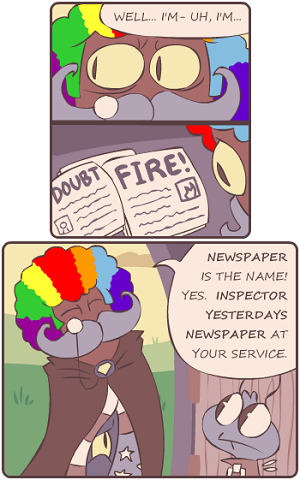 A character is in disguise, undercover, or otherwise lying their ass off about their identity and must come up with a fake name on the spot. Their eyes bounce around the room, land on one object, then another, then another...

...and by assembling the names of these objects one after the other, they have an instant pseudonym!

Sometimes their eyes will land on writing, which may supply them with a plausible name. However, the trope most often results in ridiculous aliases that somehow still fly. This also applies to details that may embellish a fake story such as accomplices, other Invented Individuals, or locations, as long as the goal is to lie on the spot by line-of-sight naming. One possible is that the items they see somehow combine to sound like their real name anyway, and they have to quickly find a new one.

There are two Stock Parodies that contribute to this: works may riff on Jan Brady's fake boyfriend "George Glass" from The Brady Bunch, or a scene involving Keyser Soze from The Usual Suspects.

Subtrope of Line-of-Sight Name. Other ways to invent a quick alias include Character Name Alias, Sdrawkcab Alias, Sue Donym and This Is My Name on Foreign.