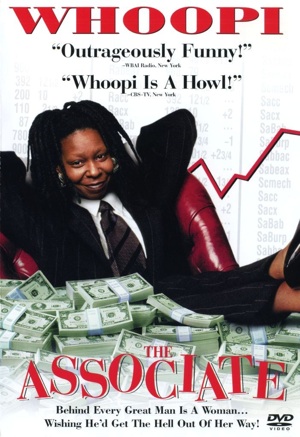 The Associate is a 1996 comedy film directed by Donald Petrie and starring Whoopi Goldberg. Also in the cast are Dianne Wiest, Tim Daly, Bebe Neuwirth, and Eli Wallach.

Laurel Ayers (Goldberg) is a businesswoman trying to pave a way for herself on Wall Street, a society dominated by wealthy white men. Tired of receiving no credit for her work, Laurel quits her job and attempts to develop her own company. Unfortunately none of Laurel’s potential clients take her seriously. Desperate to have her ideas heard, Laurel invents an elusive business partner named Robert Cutty. By pretending all of her own ideas are actually that of Mr. Cutty, Laurel creates a successful investment firm and creates a celebrity out of the mysterious businessman.

Laurel’s plan hits a snag when it becomes necessary for the fictional Mr. Cutty to make a physical appearance. With the help of her secretary Sally Dugan (Wiest), Laurel disguises herself in prosthetics as the elderly white businessman. Despite a series of mishaps, Laurel manages to pull off her masquerade for a night without being discovered. Trouble mounts as Laurel’s former business partner Frank (Daly) becomes fixated on ruining her success. Meanwhile dozens of high-profile people want a piece of Cutty, including a nosy gossip columnist and a stock broker who has a reputation for sleeping her way to the top. As everything spirals out of control, Laurel must figure out how to get rid of Cutty and stand on her own two feet.