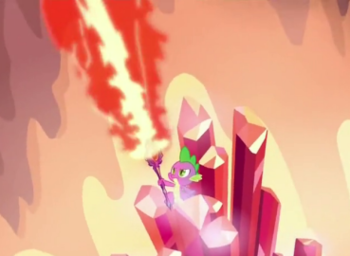 One Dragon to Rule Them All!
"I'm not big and strong. I know. But you know what? I won anyway. So maybe it takes more than just being big and strong to be a good Dragon Lord."
— Princess Ember
Written by Joanna Lewis & Kristine Songco
Advertisement:

While mining for gemstones with Rarity, Spike suddenly breaks out in a glowing scale rash. Rarity takes him to the princesses at Twilight's castle, where Celestia and Luna remark they've seen this kind of phenomenon before: it is the call of the Dragon Lord, a summons for dragons to go to the Dragon Lands. Spike feels nervous about going — recalling his encounter with the dragon Garble and his gang — so Rarity and Twilight agree to go with him in disguise.

Once the three reach the Dragon Lands, the gargantuan Dragon Lord Torch announces it is time for him to step down from his throne and choose a new successor per dragon customs. To do this, the dragons must compete in the Gauntlet of Fire, a perilous race through the Flamecano to retrieve the Bloodstone Scepter that gives the Dragon Lord authority. Spike initially wants nothing to do with the competition, and Torch's daughter, Princess Ember, points out how small and weak he is, so he gets Torch's permission to leave. However, when he overhears Garble's plans to burn Equestria to the ground once he wins, Spike decides he has no choice but to participate.

The dragons all fly over the Flamecano except for Spike, who doesn't have wings and has to swim across instead, with Rarity and Twilight following in secret. When an armored dragon is knocked into the water, Spike saves the dragon from drowning and unmasks her to reveal Princess Ember, who is competing against her father's wishes to prove herself worthy of being his successor. Ember finds out about Spike's pony friends and tells him she doesn't "do" friendship; as far as dragonkind goes, it's everyone for themselves. After she helps Spike cover for Twilight and Rarity from Garble while Spike helps cover for her, the two agree to work together to get deeper into the volcano, but Ember still insists they're not friends.

Over a set of challenges including massive boulders raining from the cliffs, flames shooting from caverns and a maze of crystals, Spike and Ember continue to progress further, Garble following close behind. At a room full of lava pits, Spike saves Rarity from otherwise being burned by a lava jet, with Ember incredulous that Spike risked himself for someone else, especially a pony. She still insists on looking out for herself, flying away in a maze of caverns. Spike insists to Rarity and Twilight that he and Ember are friends, and the three progress through the caverns, finally coming across where the Bloodstone Scepter had fallen. Garble arrives shortly behind them, exposing Rarity and Twilight by removing their disguises.

Just when it looks like Garble is going to attack all of them, Ember flies in and holds Garble off, having a change of heart over her friendship with Spike. Spike grabs the Bloodstone Scepter, becoming the new Dragon Lord. Spike calls off Garble and tells the other dragons to leave the Flamecano, then gives the scepter to Ember; Spike's only concern was saving his friends, and he trusts Ember will be able to uphold peace and friendship between dragons and ponies. She takes the scepter back to her father, who announces her as the new Dragon Lord. Spike, Rarity and Twilight leave, happy that Spike has made a powerful new ally and a good friend.