Recap / My Little Pony: Friendship Is Magic S6 E4 "On Your Marks" 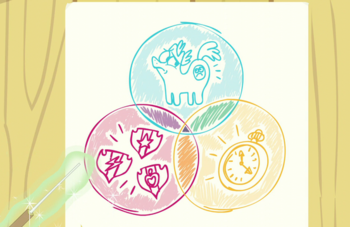 Phase 1: Earn cutie marks
Phase 2: ???
Phase 3: Profit
Scootaloo: Isn't there something you've always wanted to do on your own?
Apple Bloom: I don't know... I guess I figured we'd always do stuff together.
Story by: Dave Polsky
Written by: Dave Polsky and Josh Haber
Advertisement:

The Cutie Mark Crusaders finally have their cutie marks!

At first, they come up with the idea to go around Ponyville, looking for other ponies to help get their destinies back on track. They come up with nothing, since everypony they talk to is already very self-assured. As they sit on the swingset at their school, they come across Bulk Biceps, who laments that he has a cutie mark problem: his cutie mark is a dumbbell, but he's lifted every dumbbell in Ponyville. The Crusaders suggest he lift things besides dumbbells, and teach other ponies to do the same. He leaves satisfied, but the Crusaders lament that solving his problem seemed far too easy.

After some discussion, the Crusaders try to get each other into the things they themselves enjoy, with Scootaloo showing off her scooter skills, Sweetie Belle practicing her singing, and Apple Bloom demonstrating potion making. In every case, the other two Crusaders fail miserably. This leads Sweetie Belle and Scootaloo to suggest doing things they've always wanted to try alone. Scootaloo wants to try bungee jumping, and Sweetie Belle wants to try crocheting. Apple Bloom, however, had nothing she wanted to do on her own. When her friends leave, Apple Bloom is stuck wondering what she should try. While Apple Bloom tries various activities around Ponyville, none of them appeal to her, and she has a lack of talent or interest in any of them, further depressing her.

Apple Bloom eventually comes across a ballet class, which she immediately asks to join upon seeing everypony dancing with a partner. A spot has opened up in a dance recital later that night because of a young blank flank colt named Tender Taps who is too shy to go onstage, so Apple Bloom is allowed to try out a partnered routine. Once again, she miserably fails. The ballet teacher suggests that she would do better as a solo act, which leads Apple Bloom to leave the class altogether. Tender Taps follows her out, insisting that solo dancing can be fun, even showing off some rather impressive dance moves, but admitting he's too scared to go onstage. Apple Bloom, still in a funk, wishes him good luck at the recital later that evening, and leaves to sulk by herself in the clubhouse.

Sweetie Belle and Scootaloo later return, with Scootaloo ecstatic about bungee jumping, and Sweetie Belle interested in crocheting more, even though the one thing she made was horrible. They find Apple Bloom lamenting that she didn't find anything to do, upset that her friends don't want to hang out anymore. Scootaloo corrects Apple Bloom by saying that she didn't mean that they won't hang out anymore, just that they have things they should do on their own, with Sweetie Belle adding that they can do them even if they're bad at whatever they like. This causes Apple Bloom to remember Tender Taps from before, and the Crusaders arrive at the dance recital later that night. Apple Bloom convinces the colt to go onstage, since he can't do any worse than her, with Apple Bloom's miserable dancing helping Tender Taps overcome his stage fright. He finally bursts into a dance routine onstage, ending with wild cheers from the crowd, causing Tender Taps to earn his cutie mark. Later on, the Crusaders resolve to keep trying new things on their own, saying that it will make them even better at helping ponies find their special talents together.