Recap / My Little Pony: Friendship Is Magic S6 E3 "The Gift of the Maud Pie" 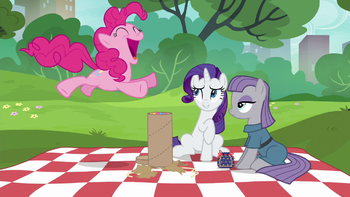 "I'm gonna love it five-ever! That's even longer than for-ever."
"I finally got Maud a gift that's just as good as the ones she always gets me, and that's all that really matters."
— Pinkie Pie
Story by Josh Haber, Michael P. Fox, & Wil Fox
Written by Michael P. Fox & Wil Fox
Advertisement:

Due to the success of her Canterlot boutique, Rarity is taking a trip to Manehattan to look for a new place to open another location. Pinkie Pie is accompanying her, as today is her traditional "Pie Sisters Secret Swap Day" (or "PSSSD") with her sister Maud, who is waiting to meet them at the station. Pinkie explains that she spends one day a year with each of her three sisters, choosing a different exotic location for sightseeing and fun; at the end of the day, the Pie sisters exchange presents. Pinkie tells Rarity that Maud always gets her amazing gifts, and she wants to be the one who gives the best present this year. She's planning on buying Maud a decorative pouch for her pet rock Boulder; Rarity suggests that they tour the city and look at various potential properties while secretly making their way to the pouch shop. Furthermore, Rarity agrees to help distract Maud so Pinkie can slip away to make her purchase.

The combined sightseeing/location-scouting trip begins, with the three mares exploring the big city's famous landmarks; along the way, Pinkie repeatedly chatters about Maud's amazing present, setting off her beloved party cannon every time she mentions it. They stop for lunch at a restaurant only a block away from the rock pouch shop; Pinkie Pie leaves under the guise of washing her hooves while Rarity asks Maud to tell her about how she met Boulder. When Pinkie arrives at the store, she sees a beautiful pouch in the window, and prepares to rush inside to buy it...but it seems that the store's owner has gone away on a spontaneous vacation. A depressed Pinkie returns to the restaurant, where Rarity suggests that the girls continue touring in the hope of finding an even better present. Unfortunately, even consummate shopper Rarity can't figure out what Maud might like, and it seems like a rock pouch truly would be the perfect gift. While Pinkie describes the amazing one she saw in the shop window, Rarity notices a stallion with an identical pouch on his waist. Pinkie rushes and explains her need to the stallion, who's willing to part with his pouch, but requires a rather hefty price: her party cannon. She reluctantly turns it over and gets the pouch, asking Rarity not to tell Maud what she had to do.

The present swapping occurs, and Maud is delighted with the pouch (not that we'd know that), while Pinkie is initially thrilled to receive Maud's gift to her: a special stash of cupcake-scented confetti for her party cannon. The pink mare throws the confetti into the air, which raises Maud's suspicions. The situation only gets worse when Rarity inadvertently blurts out Pinkie's secret. Determined to recover the cannon, Maud uses her hitherto-unknown Psychic Powers to find the stallion; with a little help from Rarity's acting skills, the stallion becomes convinced that Maud is furious with him and trades the cannon for the pouch. Pinkie is thrilled to have her cannon back, but becomes upset when she realizes that Maud gave her two amazing presents that day, meaning that she's yet again won the gift-giving battle. Maud corrects her sister, explaining that their exchanging presents is an act of love, not a contest, and Pinkie's gifts, whatever they may be, are always full of care. Rarity reveals her own good news—she's found a perfect spot for her new boutique, which she plans to call "Rarity for You." As a final surprise, Pinkie and Maud announce that they've established a new tradition for next year: "PSSSDWR," or "Pie Sisters Secret Swap Day with Rarity," in thanks for all of her help. Rarity is initially thrilled...until she realizes that now, the pressure is on her to find two great presents.

The Tropes of the Maud Pie: