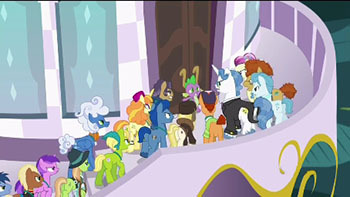 Being a pony princess ain't easy, especially if you're a male dragon.
"Okay, so maybe I did get a little carried away in making decisions. But it's not like anything bad happened."
— Spike (said literally seconds before something bad happens)
Story by Jayson Thiessen and Jim Miller
Written by Neal Dusedau
Advertisement:

The Grand Equestrian Pony Summit is being held in Canterlot, an event for species from all over Equestria to come together as one, symbolized by a giant crystal statue made of gems brought by the various delegates. After being awake for three straight days to organize everything, Twilight Sparkle is completely exhausted. After the opening ceremony, a very groggy Twilight goes to a tower in Canterlot Castle to get some rest before going back to her duties. Princess Cadance charges Spike with making sure Twilight's nap isn't disturbed so that she'll be well rested once the welcoming reception begins. Spike agrees, and starts keeping watch.

Spike begins to stop any and every loud noise in Canterlot in the hopes of not waking Twilight up, including stopping a polo game, a worker from cutting down dragon sneeze trees, and a maintenance worker from repairing a water main. However, two delegates appear at Twilight's tower, both having been booked to speak in the same hall at the same time, and they want Twilight to decide what to do about it. Spike briefly wakes Twilight up to ask her what to do, but Twilight is still so groggy that her answer makes no sense. In a panic, Spike just tells the two delegates that Twilight said to share the hall. This satisfies the two delegates, and they leave. Soon, more and more ponies begin showing up asking how to solve various problems with the summit, with Spike speaking on Twilight's behalf for all of them. After the line has dispersed, Spike reasons that he can do many of Twilight's tasks so she won't have to worry about them, though the thrill of his word having some force behind it means he wants to complete them all.

While Spike does complete many of the tasks, Cadance warns Spike not to let the power go to his head, since being a princess requires a lot of hard work. Spike initially agrees, but then quickly begins slacking off, getting massages, paintings, and bowls of gems. Finally, in the main hall, Cadance tells Spike that he's been abusing his authority, but Spike assures Cadance everything is fine. Just then, a ball from the moved polo game causes one of the dragon sneeze trees to fall over, bursting the water main and flooding the main hall. Even with the water drained, the dragon sneeze trees cause Spike to have an allergic reaction with a fiery sneeze that destroys the gemstone statue. Though Cadance manages to close the water main with crystal magic, the main hall has been completely ruined.

An angry mob of ponies, led by Fancy Pants, see the disaster and intend to storm into Twilight's room to complain. Spike tries to explain himself, but the mob won't listen. Spike just manages to beat the mob and locks the door to Twilight's room, but she wakes up soon after. Though well-rested, the door opens, and the mob calls out Twilight on the horrible decisions she apparently made. In the main hall, Twilight sees what Spike's decisions have caused, and he admits he was acting on his own without Twilight's permission to the assembled ponies. He apologizes for not getting into the spirit of the summit, and that he'd made what was meant to be ponies coming together as one all about himself. Touched by Spike's confession, the gathered mob rebuilds the hall and fixes the statue. However, one of the ponies gives Spike a bouquet of dragon sneeze flowers, causing him to get ready to sneeze at the statue again as Twilight, Cadance, and the delegates there recoil in horror...