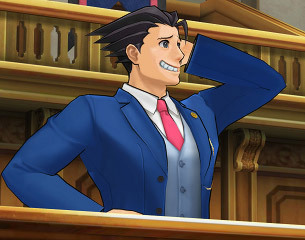 When nervous, embarrassed, or uncertain — or lying — a character will sometimes rub the back of their head/neck with one hand, often with a patently fake grin or laugh accompanying the gesture. It appears a lot in manga and anime as a simple way to show off someone's character or how they are feeling. It's often (but not always) accompanied by a Sweat Drop.

Related to Face Palm and "Silly Me" Gesture.