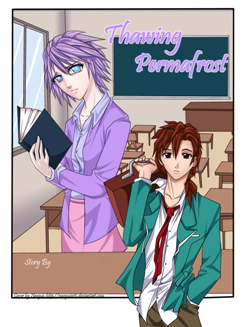 Mizore and Dan, the lead characters.
In October 2009, Chaosbahamut123 submitted the original version of Thawing Permafrost. It was a tangle of Author Avatars, Wish-Fulfillment, and Plot Holes. The series spanned a total of two complete fics and one incomplete fic.
Advertisement:

Cut to April 2011, and Chaosbahamut123 (now WanderingWordsmith) submits a rewrite

(archived) of the original Thawing Permafrost. There were improvements. Lots of them.

Set three years after Season 1 of the Rosario + Vampire manga, the plot centers around a new, British, human transfer student named Dan, who comes to Yokai Academy because he wants to study abroad and his parents refuse to fork out the money for an international college, and has no idea about the existence of monsters. There, he meets his homeroom teacher Mizore Shirayuki, who finds out that he is human after one lesson with him. After a meeting with the Chairman, Dan is offered the chance to return to the human world, or stay under Mizore's guardianship. He opts for the latter, and his adventures and mishaps snowball from there.

The 2011 series contains the old gang from Rosario+Vampire and a new cast, with some taken and developed from the original Thawing Permafrost. As of chapter thirty-five, the third story arc is finished, and Thawing Permafrost moved into the final arc of the book.

In 2018, the author published another revision of the story, available here