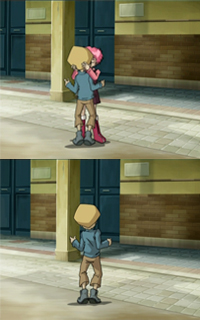 "How much longer do you think he'll stand there for?" "5 more euros says at least another two hours."

You think True Love's Kiss is impressive? Hah, all that kiss can do is wake someone up, or change their species. The most powerful kiss does the opposite: sending a person into a stiff, rigid, frozen state of shock, unable to move, talk, comprehend their surroundings, or remember their own name (in which case, it's more of a family-friendly version of the Something Else Also Rises trope). Kiss-induced shock is severe enough that a Colony Drop cannot snap them out of it. The condition can last anywhere from 24 seconds to 24 hours after the kiss, during which time they can expect to see lots of imaginary fireworks. An Accidental Kiss or First Kiss will exacerbate the symptoms.

This affliction overwhelmingly favors males. Something about this effect makes male characters look more dumbfounded, happy, and stupid than if it was applied to the opposite gender (though obviously, there are exceptions).

Not to Be Confused with Kiss of Death. Compare Distracted by the Sexy.

Sometimes I Have That Effect

Elena is completely dazed after having Zorro give her a passionate kiss and only comes to her senses after he leaves.

Sometimes I Have That Effect

Elena is completely dazed after having Zorro give her a passionate kiss and only comes to her senses after he leaves.