Please Put Some Clothes On 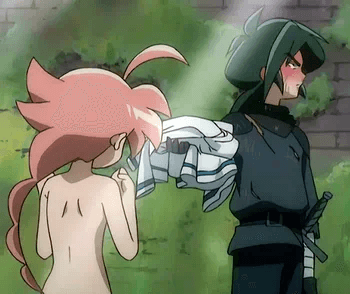 Fakir prefers the non-verbal approach.
"You are at Buckingham Palace — the very heart of the British nation. Sherlock Holmes, put your trousers on!"
— Mycroft Holmes, Sherlock, "A Scandal in Belgravia"
Advertisement:

When a character sees another character while they're naked, a common reaction is to stare briefly, become flustered and turn around, followed by asking (and sometimes demanding) that the naked character... get dressed. They may even go so far as to give the naked person their own clothing or help them find or improvise something if they have no clothes. This is the usual reaction a unattractive naked person will get, but this may happen even if the naked person is a Head-Turning Beauty, with the request usually coming from a chaste or upstanding person, but it can even happen if they are generally of low morals, who you'd think would gleefully use the opportunity to closely inspect the ''au naturel'' specimen. Even a Lovable Sex Maniac can request this if they Can't Act Perverted Toward a Love Interest.

This is common in stories where the naked character in question has: no idea about the nudity taboo and find themselves in real-life human culture, is simply indifferent to their nudity or might find be interacting with a culture or species that has an entirely different concept of nudity and modesty. It can also happen when the character is The Vamp or a Heroic Seductress who tries to work their wiles on someone who just isn't interested or has other priorities. In that case, attempts at a Striptease or Sexy Coat Flashing will end with them being rebuffed by being told to get dressed.

The most common variation is a man walking in on a naked woman for some reason, but a woman may also walk in on a man, or the two characters may be of the same sex. If the gender-bent version is again reversed, as a man *walking around* naked, he is more likely to be hit by the woman (which is usually portrayed as being a justifiable, even funny reaction for the woman). When the trope is used between two people of the same sex, the results may range from hilarity, awkwardness and more rarely disgust, usually in cases of Have I Mentioned I Am Heterosexual Today? or when the... position in which the naked person is seen is... er... not socially appropriate.

Note that this also could be a survival reflex: walking in on a naked Megaton-Punch happy woman is very dangerous. Giving clothes (i.e., making clear that perversion's not the goal) can dampen the danger.

Usually used to ramp up the comedy, sexual tension or both. Sometimes the character, rather than being fully nude, is merely wearing something very Stripperific or provocative such as underwear, lingerie or swimwear.

Truth in Television, to a degree; most men will agree that ogling a naked woman is hardly unpleasant, but it's bound to be immensely awkward when it's someone you know (and will have to interact with later) socially. As for women, the reasons are the same, just with the genders in reverse.

And then Steve agrees that Sally picking up the towel again would be a very good idea...