Fanfic / Lelouch of the Wings of Rebellion 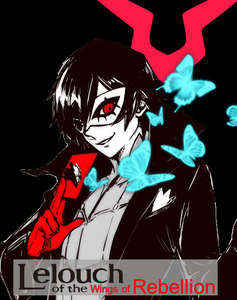 In an alternate world without Geass, Lelouch awakens to another power from the Collective Unconscious — Persona. Leading a band of phantom thieves through the Metaverse, he seeks to topple the Britannian regime, stealing one corrupt heart at a time.
—Official Summary
Advertisement:

Lelouch of the Wings of Rebellion

is a Fusion Fic Crossover where the supernatural elements of Persona 5 replace those of Code Geass.

The story is notable for its clever approach as an Alternate Universe Fic, leaving most of Code Geass world-building and its cast's characterization and motivations intact as the addition of the Persona 5's Metaverse alters how protagonists and antagonists go about achieving their goals.

This characterization is more remarkable in Lelouch himself, who organically develops into an entirely different kind of Rebel Leader as a result of wielding a power that runs on The Power of Friendship.