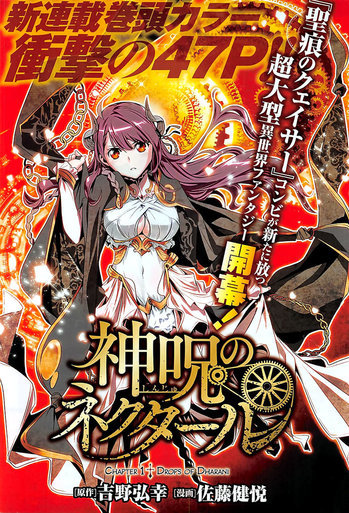 Princess Sakra is the last survivor of Adarl, desperate to restore her country. With the help of her bodyguard and brother-in-law Gray, she summons a marebito, a guardian from another world.

Enter Kai, a perfectly ordinary human from Japan. As a human, he is uniquely capable of being blessed with Sakra's god-curse and fighting anyone who stands in her way. However, it quickly becomes apparent that his broad understanding of technology is far more valuable. In this new world, which is slowly industrializing, he knows enough to help leap technology forward.

Also, Kai gets his power by sucking Sakra's breast. Oh, yeah, forgot to mention: this is from the creators of The Qwaser of Stigmata.