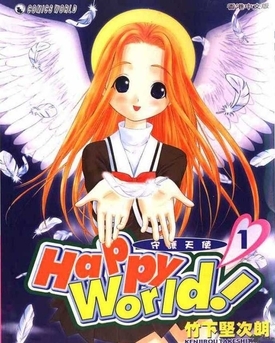 Takeshi Oomura is no stranger to bad luck. Three days ago, though, his misfortunes seem to be piling up. He gets chased by dogs, seen his house burn down... and dies from a fatal concussion. "Fourteen years of life... my life was too short."

Luckily, Heaven seems to think so too: upon dying he meets an angel called Elle who immediately resurrects him. Elle explains that Takeshi's father had passed down his role to his son — essentially, Takeshi is now the holder of all the bad luck in the world, and Elle was sent to become his guardian angel. Whoop-dee-doo.

Of course, Takeshi wants to refuse, so he seizes the opportunity to pass the curse to someone else. Except his curse is going to affect an innocent little girl, so he decides to accept it himself. Elle acknowledges his acceptance and then transforms into a human, after which she explains that she has to be near Takeshi 24/7 so she can supply him with good luck. Takeshi isn't particularly happy with this arrangement.

A manga by Kenjirou Takeshita, Happy World! ran in Ultra Jump from 2000 to 2006. It's a weird mix of Ecchi, Magical Girlfriend, Supernatural Horror and School Comedy. Though the tone shifts often, and it manages to incorporate some very thoughtful pieces on parenthood and life in general. There is also a three-episode OVA adaptation done by ZEXCS and KSS that was produced from 2002 to 2003.