Inventor of the Mundane 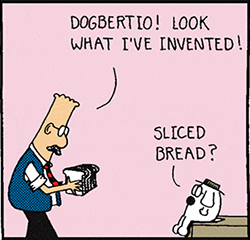 Actress: So what do you do for a living?
Harry: Uh, I'm retired. I invented dice when I was a kid.
— Kiss Kiss Bang Bang
Advertisement:

Sometimes the plot needs a character to be very wealthy without ever actually doing anything or being particularly clever. When such a thing is needed, the character will be credited with inventing something very simple, useful, and everyday. Not anything groundbreaking like cold fusion — think more along the lines of velcro.

In other cases, the character is shown to be someone who isn't necessarily a great scientist, but clever and practical-minded. Perhaps the character won't get famous or wealthy off of the invention, but their product at least will be a household name.

Compare with Weekend Inventor when inventing is a hobby rather than a lucrative living. See also Bungling Inventor, Gadgeteer Genius, and Mr. Fixit. If the inventor was an ancestor, then it is Royalties Heir. If the character only claims to have invented something, then it is Invention Pretension. If they think they've invented it, but someone else has before, see It's Been Done. In a number of cases, this also doubles as a Shout-Out or a Namesake Gag.