Film / The Blood on Satan's Claw 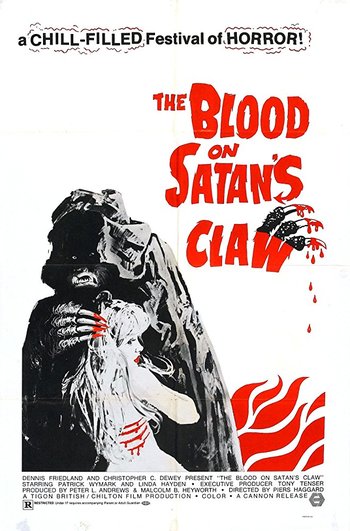 The Blood on Satan’s Claw (released originally in the UK under the title of Satan's Skin) is a 1971 English Folk Horror/Religious Horror movie released by Tigon British Film Productions.

Ralph Gower is ploughing his fields one day, and stumbles upon the grisly, inhuman remains of what he suspects to be a "fiend." He tries to warn a skeptical judge, but when he takes him to the site of his discovery, the bones are nowhere to be found. Meanwhile, a group of teenagers playing in Ralph's fields stumble upon a few of the bones, and are possessed by their influence. Soon, the villagers begin to succumb to the influence of the fiend.

Tropes featured in this movie: