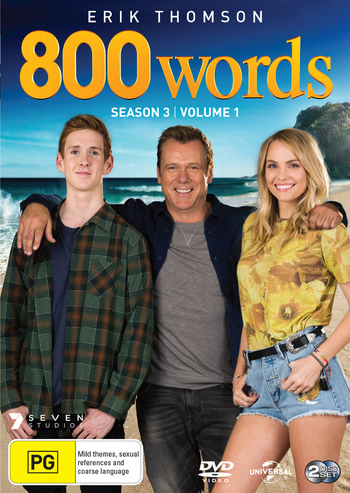 800 Words (stylized as 800 words) is an Australian-New Zealand comedy-drama series about an Australian widower who moves across the Tasman to a small town in New Zealand along with his two teenage children.

After the death of his wife Laura, newspaper columnist George Turner (played by Erik Thompson) uproots his family and moves to the idyllic small town of Weld in New Zealand. However, their time in Weld starts off on the wrong foot when George realizes that he has been sold the wrong home, along with the family losing their luggage on their trans-Tasman flight. Tensions between the Turners and the quirky locals flare up at first, but they eventually become part of Weld society, finding acceptance and love along the way, helping them cope with their loss.

Each episode has George writing a newspaper column 800 words long for his boss Jan (played by Bridie Carter) in Sydney that centers on the theme of the episode(s). George has also written for the local paper News of the Weld, run by the town's biggest benefactor: Bill "Big Mac" McNamara.