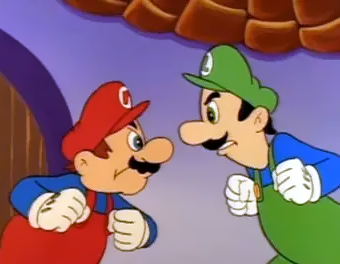 Don't say goodbye
I promise everything will be alright
Don't leave me, I'm sorry
I'll fix this if it costs me my life
I'm going to make this right
— Aviators, Friendship

A type of episode that centers around a Break-Up/Make-Up Scenario: two characters suddenly start feuding with each other, either over a minor matter that gets blown out of proportion, or sometimes for seemingly no reason at all. Sometimes, another character will try to get the two feuding characters to make up by putting together some sort of crazy scheme (i.e. writing fake apology letters), but there is actually a 90% chance that the scheme will fail, and the feud intensifies further From Bad to Worse. In the end, the two characters will invariably put behind their silly feud to help their friends in some kind of trouble (if not that, then expect them to stop fighting because of an Enemy Mine instead). An Aesop about putting behind your troubles usually will soon follow afterward.

They might be feuding over a common love interest, or perhaps due to hometown prejudices, but sometimes the two may feud so long that, in the end, they can't remember what it was about.

Alternatively, two longtime friends get mad and breakup over some random bad event (often, a Girl of the Week can be the cause of such a conflict). Kids' shows seem to love this one, as The Power of Friendship is the backbone of their group dynamics.

This often leads to their other friends getting into an argument and/or and fight against each other, and taking sides. Much commonly, there's always a time where both sides have to reconcile and apologize to each other, which happens at the end of each episode in particular.

Sometimes a Merchant of Menace makes a few bucks by selling weapons to both sides, continuing and escalating the fight to fatten his own pockets.

If the conflict seems too reminiscent of a lovers' quarrel, Homoerotic Subtext may ensue.

Compare Achilles in His Tent. Sister trope to Split and Reunion. Not to be confused with episodes of the Feud.