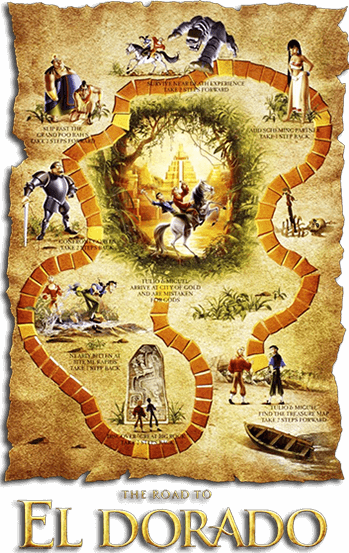 All will be revealed at a golden shrine.
"THE TOWER DRAWS CLOSER..."
— Every blurb for The Dark Tower books
Advertisement:

Alice wakes up one morning, only to hear screams. Rushing outside, she spots the love of her life, Bob, being stuffed into Charlie's car. Failing to catch them, Alice promptly suits and loads up, and starts trekking. Her goal? Rescue Bob from the dark Castle Charlie, which is always looming eerily on the horizon...

While MacGuffins tend to take the form of things or even entities, a common alternative is to use a setting or location — where the driving force is instead a place where everyone's trying to get to (or get there first), but when reached doesn't have any significant impact on the plot.

Most commonly found in media centering around The Quest (which, more often than not, contains another MacGuffin they desire). The other most common occurance is media that involves races — it often doesn't matter whether the finish line is in Cairo, New Zealand, or Omaha, just that they arrive first or on time.

Compare with Going to See the Elephant.