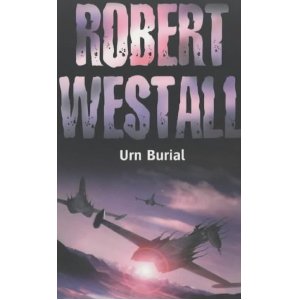 What is Man that thou art mindful of him? Psalm 8, v 3
Advertisement:

Urn Burial is a 1989 Young Adult Science Fiction novel by English author Robert Westall. Young Cumbrian shepherd Ralph Edwards is out one rainy afternoon seeing to his flock when he comes across one of the ancient cairns that litter Fiend's Fell. The cairn has been damaged and partly collapsed, revealing a strange metal object hidden inside of it. Initially, Ralph thinks he's found some sort of military monitoring device, but a closer inspection reveals that it seems to be someone buried in the cairn. But the burial is neither a stone-age man nor even a human one.

The cairn covers the grave of a felinoid alien named Prepoc, containing several vials of combat drugs, Prepoc's weapons and a 'memory-helmet' via which Ralpha discovers the name and history of the now-dead alien. He rebuilds the cairn and determines to say nothing of his bizarre discovery to his mother or his friends and simply to try and forget that it's even there. And then, the village sewage works disappears. In opening up Prepoc's grave, Ralph finds himself thrown into an ongoing conflict between Prepoc's catlike people, the Fefethil, and the dog-like Wawaka. The former trying to prevent the latter from interfering with non-spacefaring worlds and the latter searching for hidden weapons from an ancient conflict that saw its final battle played out on a prehistoric Earth.

The Wawaka track objects from Prepoc's cairn by the distinctive radiation signature they have, following Ralph and kidnapping the local postman when Ralph is convinced by his girlfriend to send a small sample of one of Prepoc's combat drugs to ICI and maybe get some money out of his discovery. Eventually, they grow bold enough to act more openly and the conflict spills into ordinary life on the Cumbrian hills. But what exactly is buried on Fiend's Fell that's so important to either of these alien races?

Not to be confused with Urn Burial, A Discourse of the Sepulchral Urns lately found in Norfolk, by Sir Thomas Browne. Or Urn Burial, a Phryne Fisher novel that takes its title from that scholarly tome.