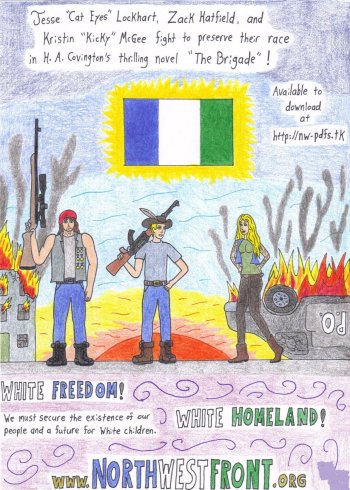 Promotional image for one of the books in the series. Yes, really.
A series of novels written by white nationalist Harold A. Covington. In the series of books, a bunch of white separatists who refer to themselves as the Northwest Volunteer Army (NVA) launch an insurgency against the United States federal government and establish a Northwest American Republic (NAR). Beginning as a political movement, it morphs into a military organization after the 'Coeur d'Alene' which was the federal government trying to take children from a white nationalist family and transferring to yuppies, which sparks a rebellion. Eventually, the Northwest Republic is formed. In a second war, it expands and seizes, then governs "the entire states of Idaho, Oregon, Washington, and Wyoming as well as hefty chunks of Northern California, western Montana, Alberta, British Columbia and Alaska".