Film / Five Weeks in a Balloon 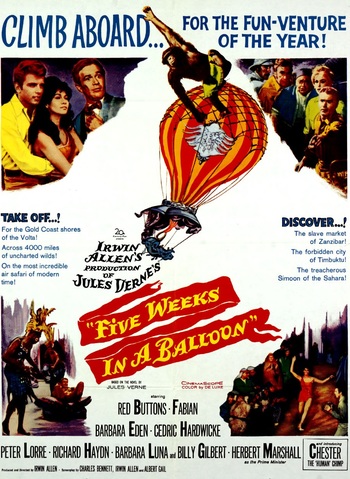 Six weeks would have been too long.
Advertisement:

Five Weeks in a Balloon is a 1962 adventure film from Irwin Allen, loosely based on Jules Verne's 1863 novel of the same name. It features an All-Star Cast including Red Buttons, Fabian, Barbara Eden, Cedric Hardwicke, Peter Lorre, and Herbert Marshall.

In 1862 in England, inventor Professor Fergusson (Hardwicke) is commissioned to claim uncharted land in West Africa for Britain by flying his giant hot air balloon there.