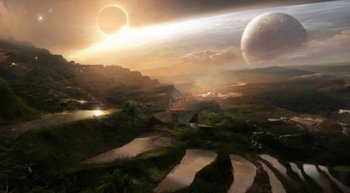 Sometimes the most important planet that you conquer is the one you can relax on after everything.
Hoshi: It's a beautiful day.
Risian: [laughs] You've obviously never been to Risa before.
Hoshi: How could you tell?
Risian: Every day is beautiful here.
— Star Trek: Enterprise; "Two Days and Two Nights"
Advertisement:

A planet near-universally regarded as an ideal place to live and a beautiful place to visit: fresh air, bountiful soil, friendly people, vibrant culture and a peaceful atmosphere, this is a close to heaven as you're likely to find in a Sci-Fi setting without getting a Lotus-Eater Machine or an Artificial Afterlife involved, to the point that it can qualify as The Promised Land if it's the end destination of the story.

A key aspect of these worlds is natural beauty, so City Planets are usually not eligible for consideration, as are desert planets. Other than that, the biomes of Paradise Worlds are only limited by the imagination: they can be grassland, forest, ocean, natural or terraformed — or some alien combination of the above. Expect to see a Shining City with Crystal Spires and Togas if urban settings feature alongside nature; if it's more sparsely populated, expect to see Arcadia, or even the Ghibli Hills. If enough tourists come to visit and enough vice is on offer, this may also be classified as a Pleasure Planet.

Be warned, however: one of these may very well turn out to be a Crapsaccharine World. At other times, though, there may be no downsides at all, and this planet might be every bit the paradise it seems to be, enough to qualify as a Utopia.

All the same, best hope nobody tries to blow it up...