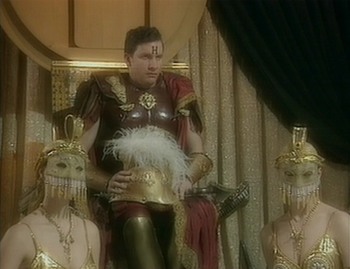 The episode begins with Rimmer getting the bad news: despite being a hologram, his program has a rare flaw caused by his living self's disastrous genetic and stress-related health problems, and he must avoid stressful situations or risk a fatal error. Also, Lister has decided to loot the derelict of the simulant ship that they destroyed because the supply situation is desperate.

The wreck is dangerously unstable, and as they finish salvaging, the female simulant tracks them down. Not caring if she lives or dies at this point, the simulant attempts to trigger a "shipquake" that will tear it apart. Rimmer manages to sneak up behind her, but rather than ambush her, elects to jump into the nearby escape pod — much to everyone's disgust — and ends up causing the shipquake himself. Fortunately, Kryten finds a handheld teleporter which allows them to beam back to Starbug, despite a brief sojourn into the past.

After getting back to their correct time zone and escaping the exploding simulant ship, the trio are contacted by Rimmer, who after a little I Meant to Do That routine, admits he can't actually control where the pod is taking him. Since his pod is an old autopiloted one, he'll be stranded on the nearest habitable planet until Starbug fetches him. And also he's going through a wormhole, so the time dialation means he'll be spending six hundred years in his own company.

Since it was a pod from a terraforming ship, that becomes literal. After sprucing the place up into a verdant garden, Rimmer tries to create an Eve. He winds up only able to duplicate himself, but resolves to try again. The Starbug reaches the planet and the boys are immediately captured by several Rimmers in Roman garb, and taken before their leader. Apart from their physical deformities, they are charged with charm, bravery, and worst, honor. They didn't even try to sell each other for their own safety! They're thrown in the dungeon where they find the original model, half-mad with despair at being overthrown by himself. Thankfully, Kryten has the teleporter, and they make a swift escape. However, they apparently end up back in the past once more, before the "past" Rimmer reveals they've actually jumped several weeks into the future, and something hideous has recently happened to Lister. Despite Lister's protests, Kryten beams them back to their correct time, leaving him (and the audience) unaware of what his future holds.