Series / Julie and the Phantoms 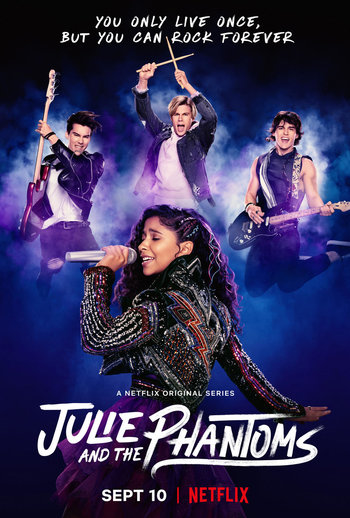 Julie and the Phantoms is a 2020 Netflix original series created by Dan Cross and David Hoge (and directed by Kenny Ortega of High School Musical and Descendants fame) based on the 2011 Brazilian show Julie e os Fantasmas.

It centers on Julie Molina (Madison Reyes), a teenage girl with a passion for music who stopped playing ever since her mother died. But when she meets three ghostly musicians — singer and guitarist Luke (Charlie Gillespie), bassist Reggie (Jeremy Shada) and drummer Alex (Owen Joyner) — members of the 1990s band Sunset Curve who died on the night of their first big gig, Julie gains back her love of music and the three ghosts team up with her to become the band they never got to be while alive.

The 9-episode first season was released on September 10, 2020, but had no updates for an entire year. As of December 18, 2021, it has officially been cancelled and not picked up for a second season.