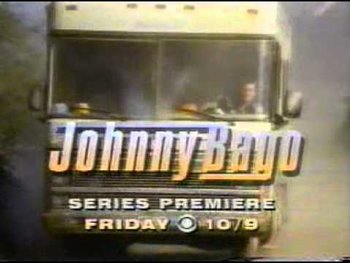 Johnny Bago was a short-lived TV series airing on CBS in the summer of 1993, created by Robert Zemeckis and Jeffrey Price & Peter S. Seaman (Zemeckis also executive produced the series and directed the pilot) and starring Peter Dobson.

Small time hood Johnny Tenuti has just been released from prison after a five year sentence for a crime he claims not to have committed. His cousin, a mid-level Mafioso, asks Johnny to cover for him on a date which is on the same day as his wedding anniversary. Johnny does so, only to find himself framed for murdering the Mafia don's son.

So Johnny goes on the lam. He hooks up with an old man named Hick in a Winnebago RV. After Hick dies, Johnny repurposes Hick's RV and hides out in the RV community, travelling the highways and byways of America using the alias "Johnny Bago."

Johnny Bago's gonna have his day/A little further down the lost highway...